How to Code a Turn-Based Game with Godot

Learn to create a turn-based combat system with the Godot game engine, through a serie of  youtube tutorials created by GDQuest that will take you on journey on How to Code a Turn-Based Game with Godot.

The objective of the tutorial is to great the ground bases, codebase and  tools to show you some of the best practices to create:

The initial goal is to create a mini-demo with the full combat loop, character experience, skills, some pretty art, and basic map navigaton and conversation with NPCs.

The format of RPG that is being developed is of type JRPG, Japanese Role Playing Game.

What is a JRPG?

JRPGs (Japanese Role-Playing Games) are games that differ from Western-style role-playing games. JRPGs are usually, but not always, created by Japanese developers. The name “JRPG” comes from the term “console RPG,” which refers to games such as Dragon Quest and Final Fantasy[1]. However, because the name JRPG now encompasses a wide range of RPGs, it is no longer considered a genre but rather an umbrella phrase. A game can be classified as a JRPG if it meets the requirements that one would expect to find in a JRPG.

For more info on JRPG

Source code for the Open JRPG

The project is open source and available on github 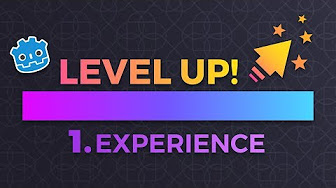 The serie is composed of 18 videos that you can find listed and described in below sections.
Leveling System and Experience with Godot (tutorial 1/2)
The first of two tutorials to code a leveling system and experience bar with the Godot Game Engine, the lesson covered works for any type of game and not just for a turn based game.
Animated Experience Bar in Godot (tutorial 2/2)
After coding a Leveling System, the tutorial covers the design ofan animated progress bar that loops when a character levels up!