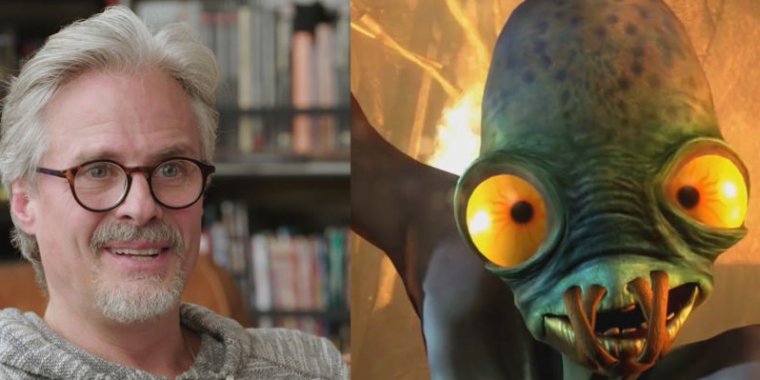 Some games entice you into playing them with loud marketing campaigns, sexualized cover art, or the promise of ludicrous over-the-top violence. But then there are games like Lorne Lanning’s Oddworld series—games that don’t lead with muscle- or bikini-clad heroes and defy easy categorization. Games like Oddworld tempt you into playing by promising a different kind of experience. There are guns and violence, sure, but the setting is strange, the plot is filled with gray, and the hero—well, Abe isn’t exactly sexy, or really even, you know, human.

But players who gave the original Oddworld a chance back in 1997 found themselves stumbling through a unique and fascinating world that was equal parts surprising and subversive, and the series has gone on to acquire legitimate cult-success status. With the approaching release of Oddworld: Soulstorm in 2020, we thought it was a good time to pay a visit to Lorne Lanning and his team at Oddworld Inhabitants, and talk about our favorite meat processing factory worker and his long journey from design notebook to screen.

“Write what you know,” they say…

We interviewed Lanning at the Emeryville, CA headquarters of Oddworld Inhabitants, the studio he co-founded with Sherry McKenna in 1994. For Oddworld fans, the office was a magical place, stuffed with the kind of memorabilia that amasses over more than two decades of game design. Lanning walked us through his journey to become a game creator, starting from his poor beginnings in what sounds like an unstable family. He got into video games because his father had a job at Coleco, and Lanning thought gaming would be a good way to meet girls.

Lanning’s ambitions weren’t aimed at the small screen—he had his eyes set on making movies. To pay the bills, he took a job at TRW Aerospace, where he worked on anti-missile defense systems (it was the 1980s, and Reagan’s Strategic Defense Initiative boondoggle was in full swing). His exposure to soul-crushing bureaucracy and supplier management formed the basis for many of the Brazil-seque ideas later presented in the Oddworld games.

But it’s the time Lanning spent at Rhythm and Hues Studios that had the biggest effect on Oddworld—at least the series’ collective look and feel. Working on visual effects set him on the path of visualizing game design in terms of cinema—not just how things were framed on screen, but also the discipline and budgeting style of the movie industry. When Lanning and McKenna (a fellow Rhythm and Hues alum) eventually started their own studio in the 90s, they approached their game and their character designs in the way Hollywood does. This obviously is de rigeur in 2019, but in 1995 when work on Oddworld started, it was most definitely not the industry norm.

When designing the first Oddworld game, Lanning and his team had to confront an annoying reality of game design—there are only so many ways to interact with the world in a side-scrolling action game, and a lot of those ways involve shooting stuff. And one of the immovable design goals of Oddworld was that protagonist Abe would go through the entire game without being armed—not because of any kind of political stance against guns, but because having Abe unarmed increases the character’s vulnerability in a world that’s already overwhelmingly hostile. A gun would provide an easy solution to many of the game’s problems, and where’s the fun in that?

It took some time to work out a solution, but Lanning the other designers decided that characters like Yoda don’t need guns to solve problems. They instead infused the game with a pastiche of mysticism drawn from a number of different sources, which gave Abe his secret weapon: the ability to possess other characters, including bad guys with guns. This let them then design in some puzzles involving shooting, which the player can solve by finding a bad guy, taking over his body, and having the bad guy shoot his way through the puzzle. To prevent the player from picking up the bad guy’s gun after the puzzle is solved, NPCs violently explode after possession.

This video ended up being extremely long in the rough cut because Lanning gave us so much great interview material. We had to trim out quite a bit, but we’ll be producing an extended version if there’s enough interest in this video. There are several rabid Oddworld fans here at the Ars Orbiting HQ, and this video, like several others in the War Stories series, was a passion project with a lot of emotion invested in it (not to mention some custom voiceover lines performed by Lanning just for us!). We hope you enjoy watching it as much as we enjoyed making it.