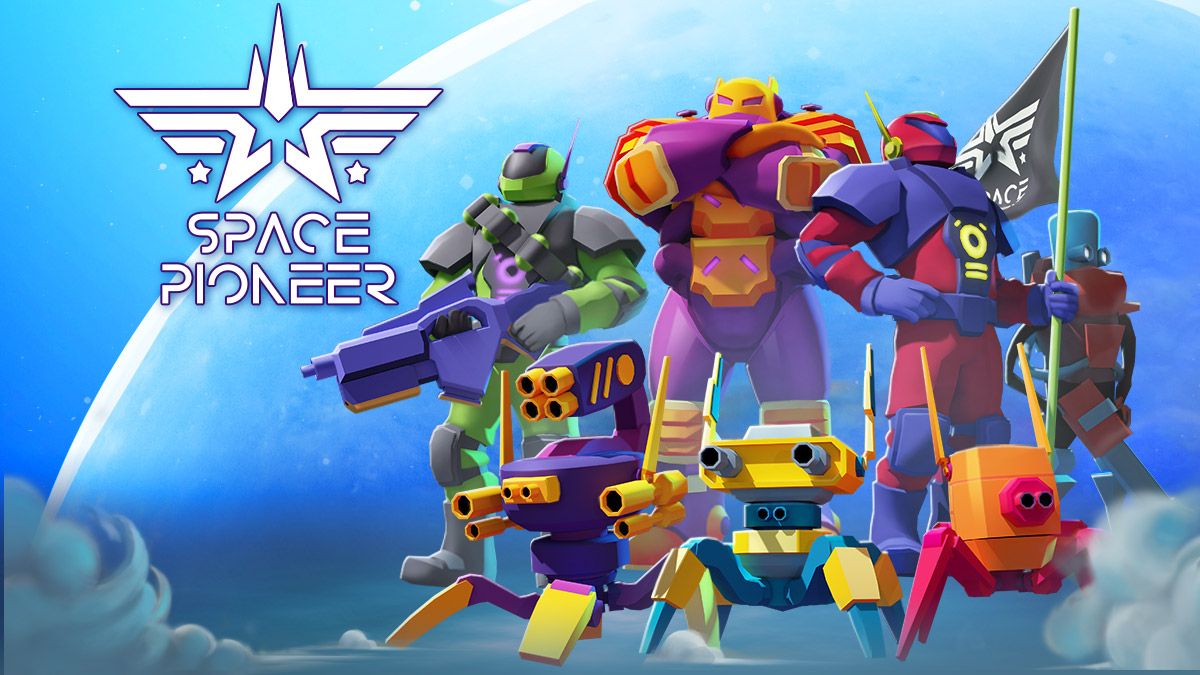 Space Pioneer is an isometric, twin-stick shooter that has you travelling planet to planet completing objectives all while moving towards the final goal of defeating the evil Xeldar. Hordes of aliens and creatures inhabit each world and you must blast your way through them in order to complete the missions of each galaxy. As an intergalactic bounty hunter, you have been tasked with this quest and without you the universe looks like it’ll be a much different place.

Although this is a tale most can get behind, that is about the beginning and the end of it. This is purely an action game that has had a narrative plopped on top of it. Even though I am a sucker for a good story, this is a title that doesn’t require anything extra. The arcade-style experience here is something that shooter fans will be able to get behind regardless of its bare-bones story.

Playing a bit like Helldivers, you are dropped onto remote planets with varying fauna and weather conditions, where you are pointed in the direction of your objectives by an ever-present arrow. I found that the reason behind what you are doing isn’t explained in the slightest and the experience almost feels better not reading too much into it. Just run ‘n’ gun your way around and capture the points around the map. There are multiple “different” things you are doing, from capturing drones to clearing alien nests to finding artifacts. At the end of the day though, you’re still finding an object with a circle around it, standing in said circle while enemies spawn, followed by your return to the starting location to move onto the next level. This loop is extremely dry; the only saving grace is the fact that the shooting itself feels pretty good.

You are given multiple weapons to choose from as they unlock through progression. There’s also  a deep upgrade system for your character, abilities, weapons, and the like. Experience is earned through completing missions or via overarching objectives. These are completed with more long-term work, such as killing hundreds of enemies, collecting tons of coins, etc. Instead of just having a plain-Jane leveling system, you earn the opportunity to upgrade all of these categories. Once you spend the coin to do so you are awarded the XP towards your next level. Although the experience system is quite convoluted, basically you just need to get as many coins as possible from missions and objective completions so you can get that better shotgun or stronger health pack ability. The upgrade system itself is well done in comparison to the rest of the title, although offering just three character types, with two of them locked behind level progression, isn’t ideal.

The missions you complete on each planet earn you stars that are used to unlock the next chapter of the game. With eleven chapters, followed by an unlockable endless mode, you have something to work towards. However, the game is short as I was able to blow through the main chapters in about three hours and the endless mode continues this game’s monotony problem to the extreme; this isn’t a game I will find myself revisiting after the initial completion. Grinding can be done if you really want to hit every star and objective in order to get the shiniest of weapons and most powerful of abilities but, all in all, isn’t a necessity.

Difficulty is fair, but tough, especially when you find yourself quickly surrounded. As long as you stay on your toes and keep moving you will usually have no issues, but things can devolve very quickly if you aren’t paying attention. Even with all of the downsides detailed here, the gameplay itself is addictive; I found myself quickly jumping into the next mission regardless of the fact that I wasn’t actually having all that much fun. Boss fights really amp up the juice but, once you figure out their attacks, you can get into a rhythm to finish out the fight quickly.

Space Pioneer offers a decent arcade experience for those looking for this specific style of game. For those who get obsessed with completion, there is a good bit you can grind towards as well. Otherwise, you have a title that is similar to several others on the Nintendo Switch that doesn’t offer anything new or exciting. Although addictive and fun at times, the game suffers from not offering a concise story for those who require it and being too cookie cutter to set itself apart.